Ever wondered how the mudcrabs of Roebuck Bay go about breeding and bringingsuccessive generations of baby muddies into the world? While very little is known about Roebuck muddies, we do know a lot about their country cousins from the Northern Territory, thanks to the NT Fisheries Department.

The time to score usually falls on a full moon. This is when the female is most likely to moult. And when they’re moulting … well think Thursday night at the Roey. Male mudcrabs’ eye-stalks stick up when a female is about to moult. They fight off other males and claim their girl.

Climbing onto her back and holding her tightly with their back walking legs, these blokes will stick with their girls for up to four days, carrying her around and shielding her from any danger. This close contact and constant rubbing, results in the blokes copping some love marks too.

The real action happens with the moulting, when she’s just shed her armour. She’s soft and vulnerable and he takes this opportunity to flip her over. Belly to belly, he injects his sperm into her oviduct. It must be worth it because they stay like this for 7–18 hours!

When Business Time is over, the male flips her back. Face-first in the mud, still mounted by the big boy, she remains protected for another  four days – no other male gets a crack. Once her shell is hard, he’s off ... back to the Roey?

The female is left alone to spawn. She digs a little ditch in the mud. The eggs travel from her oviduct. Fertilised by the sperm on their way out, they are released into the muddy ditch. She quickly gathers them up under her abdomen, slowly moves out of the mangrove den and heads for deeper  water. 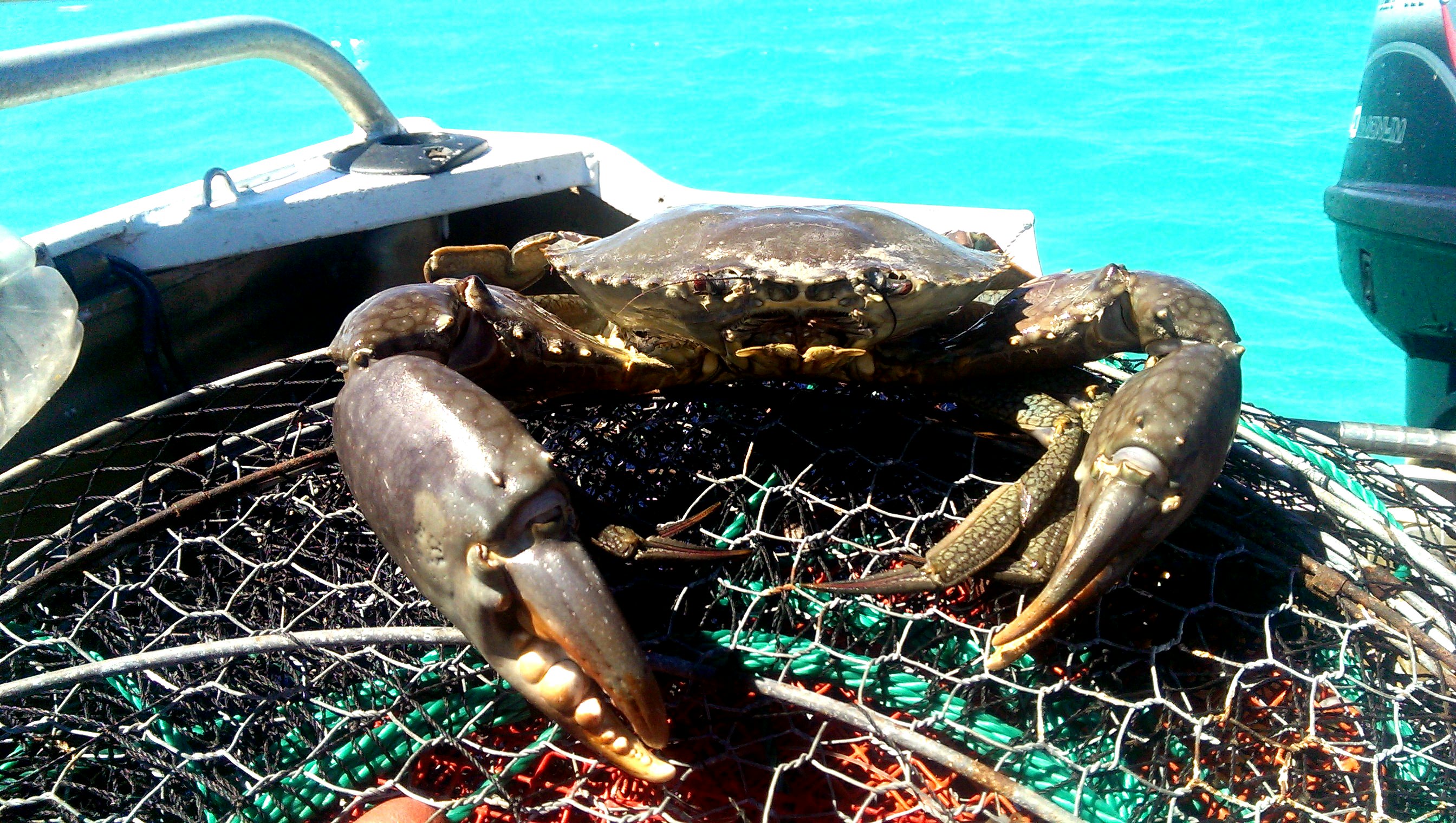 After twelve days or so, the bright orange eggs turn almost black indicating the zoea (babies) are ready to hatch. Starving hungry (mudcrabs eat little or no food when berried up) and exhausted from carrying around a huge load of eggs, she stands up on her back legs and vigorously moves her abdominal flap, shaking the zoea free. Two to five million are released but most die before they get a chance to become parents themselves.

After 25 days, the zoea’s become megalopa’s who settle into the comfy, safe seagrass beds and continue the process of growing and moulting, moulting and growing. At some stage, they make a break for the mangroves. On their first birthdays, they’re the size of the palm of your hand and, within two years, they reach sexual maturity. This is when the fun begins.

While the jury’s still out on how long muddies actually live for, we think the average life expectancy of a wild mudcrab is four years.

Now imagine what happens when we strip the big males from a creek system, particularly at the end of the dry season?  What are we left with? Heaps of little fellas trying to mate with big girls. Remember mudcrabs are highly cannibalistic so when a small male is mating and a bigger male comes along, the couple may get killed and eaten. And how can a little fella carry a big girl around? How does he make sure she gets enough food and doesn’t get swept away by the tide? He can’t! She carries the load and wastes precious egg-making energy in the process. When moulting mania starts, how is a little fella going to successfully defend his prize catch against the big bad Barra, mulloway, sharks or rays. This is the Vulnerable Time remember?  Successful reproduction is undoubtedly impaired in the absence of formidable males with their horse-crushing claws to defend and care for their women.

This is where a marine sanctuary within the upcoming Roebuck Marine Park would help to ensure a naturally mature population of big male muddies doing what they do best.  A mudcrab-rich area which allows for highly successful reproduction can be created in an isolated sanctuary zone, removed from popular fishing areas.

Like The Fingers, for example … there would be more eggs, better quality eggs. And these eggs would be dispersed in the deeper channels and float all over the bay before they settle.

A sanctuary zone would buffer stocks in bad years and provide researchers with a very good measuring stick as to how these amazing creatures cope with continuous fishing pressure. More importantly, this could mean better mudcrab recruitment, year after year and more crabs for all.