Exploring habitat complexity with drones – from stockpiles to reptiles

To understand more about ecological effects of fire in the Great Sandy Desert, EK ecologists have teamed up with Karajarri and Ngurrara Rangers to survey reptiles and mammals under different fire regimes (see EK Newsletter Issue 91, December 2020, How does right-way fire help animals in the desert?). However, a missing piece of the puzzle is a way to accurately measure how habitat complexity changes with fire. Animal habitats are often thought of in structural terms; the height and density of vegetation are key elements for animals living in an area, but quickly and accurately measuring habitat complexity is, well, complex!

By creating three-dimensional models of the vegetation at our biodiversity monitoring sites using photogrammetry (stitching together a series of overlapping photographs, captured in this case by EK’s drone), we can describe the vegetation structure much more quickly and accurately than with conventional on-ground techniques. Humans are pretty good at recognising different types of plant, but notoriously inaccurate at estimating the area of irregular shapes, like the percentage cover of vegetation at a site, and even worse at estimating volume, like guessing the number of jellybeans in a jar. By taking a bird’s-eye view, photogrammetry from drones uses multiple images to triangulate the position of individual pixels matched from different images to generate a three-dimensional model (see EK Newsletter Issue 90, August 2020, New tech for conservation). This works in much the same way as seeing with two eyes gives us better depth perception. With advances in computing technology, the millions of calculations required can now be completed in the time it takes to have a cup of tea.

We have taken technology that is now used routinely to calculate stockpiles in the mining industry and are applying it to better understand the ecological complexity of the Great Sandy Desert.

By combining information on the animals and plants with a three-dimensional model of the site, we are piecing together a more complete picture of the full complexity and ecological benefits of reintroducing traditional fire management by Aboriginal rangers to desert landscapes. 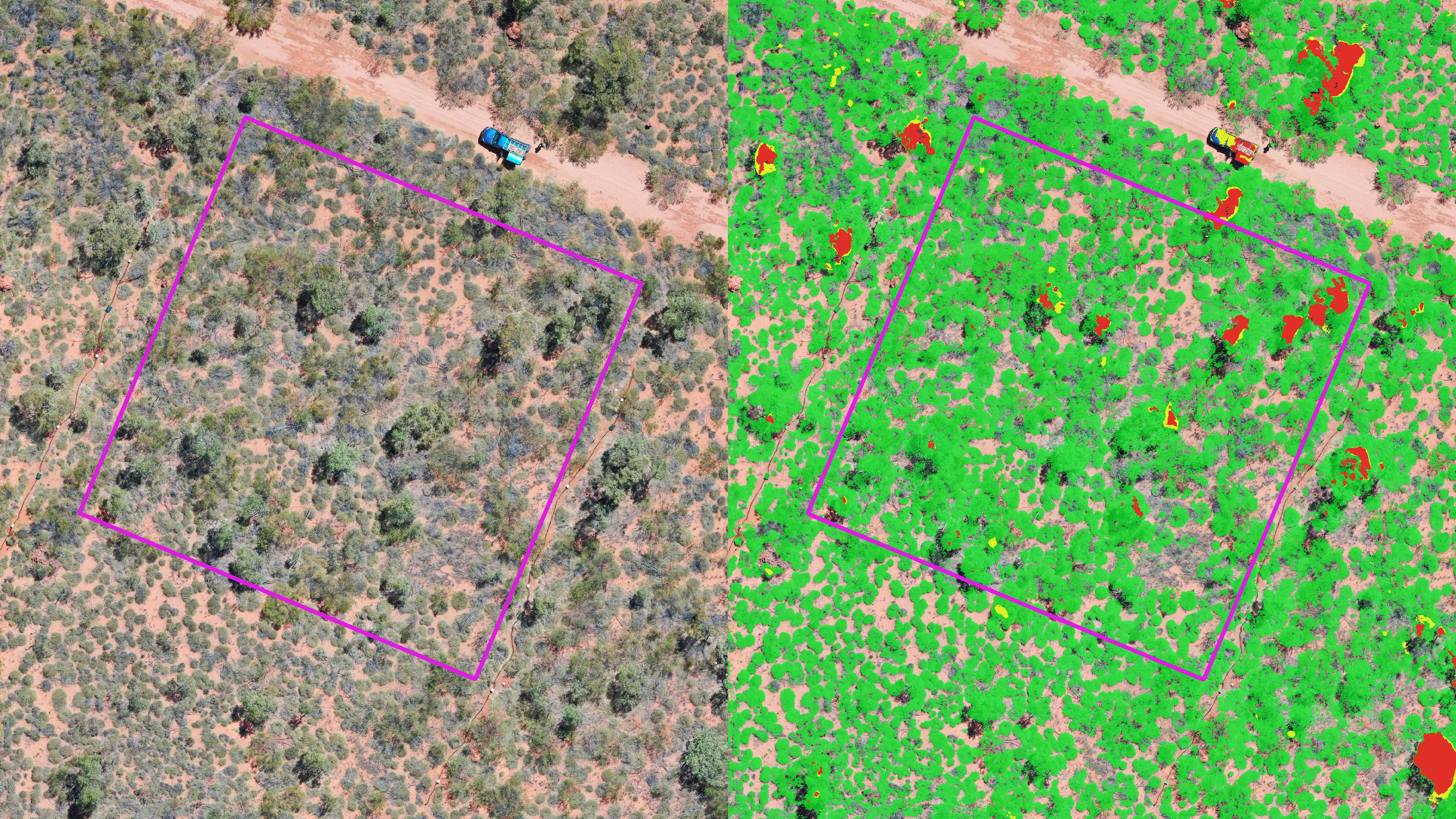 In the figure above, you can see the two trap lines used for animal capture, running perpendicular to the vehicle track, either side of the pink 50 x 50m square. The left image shows the site as it looks from the drone, the right image is the same site with the vegetation categorised by height (green <1m high, yellow 1-2m and red >2m). This site was part of the Yilpi (Edgar Range) survey with the Karajarri Rangers in September 2021. The habitat is relatively complex, with old, hollow-bearing trees, moderate shrub cover, established hummock grasses, and substantial amounts of coarse woody debris (fallen timber). We caught three species of native mammal and ten reptile species at this site. We have also undertaken botanical surveys at each trapping site, recording all plant species occurring within the pink 50 x 50m quadrat.