Since the American cane toad (Rhinella marina) was released in Australia in 1935, billions of these voracious predators have spread across Queensland and invaded neighbouring states, devastating native wildlife.

Toxic to predators that eat them, cane toads are listed as ‘threatening or potentially threatening the survival, abundance or evolutionary development of native species and ecological communities’ under the Environment Protection and Biodiversity Conservation Act 1999.

In 2009, cane toads crossed into the north of Western Australia from the Northern Territory. As of early 2017, populations have established themselves in the north Kimberley and are moving steadily to the west. They have reached Yiyili Community between Halls Creek and Fitzroy Crossing. 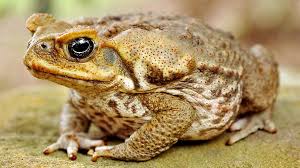 What we are doing

In the Central Kimberley east of Fitzroy Crossing, the KNP team is assisting the Gooniyandi Rangers to prepare for the arrival of the toads on their country. Together, at select sites, we have been recording and monitoring wildlife (including native frogs, goannas and other reptiles) and assessing habitats around springs. This baseline information on abundance and diversity will enable us to measure the impacts of the toads on wildlife and habitats once the toads arrive.

We also assessed springs in these areas for their suitability as cane toad habitat. Once toads invade, they will persist at moist sites during the dry season. We also considered control methods at different sites, including fencing, and collecting cane toads by hand in the dry and wet seasons, and killing and disposing of them humanely.

We will continue the regular monitoring of frogs at springs during the wet season and attempt to control toad numbers at springs when they arrive.

Our activities are guided by The Cane Toad Management Handbook produced by Rangelands NRM and the WA Department of Parks and Wildlife.