The Fat Ladies of the Sea

The most beautiful lady of the Australian seas has to be mother Dugong. She has a large buxom figure, tipping the scales at 450kg of pure curvy softness. Add to this exquisite feminine form a pair of large juicy lips and sultry eyes and we have a lady irresistable to men and male Dugong alike.

That is, if you don’t mind a lady with a tough, bristly mustache guarding those voluptuous lips and the presence of sharp tusks when things get rough. She can’t see very well so even the ugliest of males stand a chance with her, although she does have excellent hearing, so no gossiping behind her back. Her prominent nose means she has an exceptional sense of smell and can sniff out the juiciest seagrass and the smelliest male all at the same time.

She also holds that unique position of power where she gets to choose which males she will mate with and often selects a few, guaranteeing conception, although she seems unperturbed as to who the father actually is. Male Dugong are always ready, always eager to mate but have to wait until she is ready, which can be a considerable amount of time as pregnancy lasts 14 months and she only becomes pregnant once every 3-7 years.

During mating male Dugong in Shark Bay exhibit a strange lekking behaviour. Imagine a group of rowdy men outside the pub, all noisily fighting and posturing with each other, all vying for the right to mate with one female. The lone sultry female turns up to the pub for only one reason, to choose the best males, this is lekking behaviour. The lucky man has to swim upside down underneath her to mate and fight off the other contenders at the same time - not an easy romance. 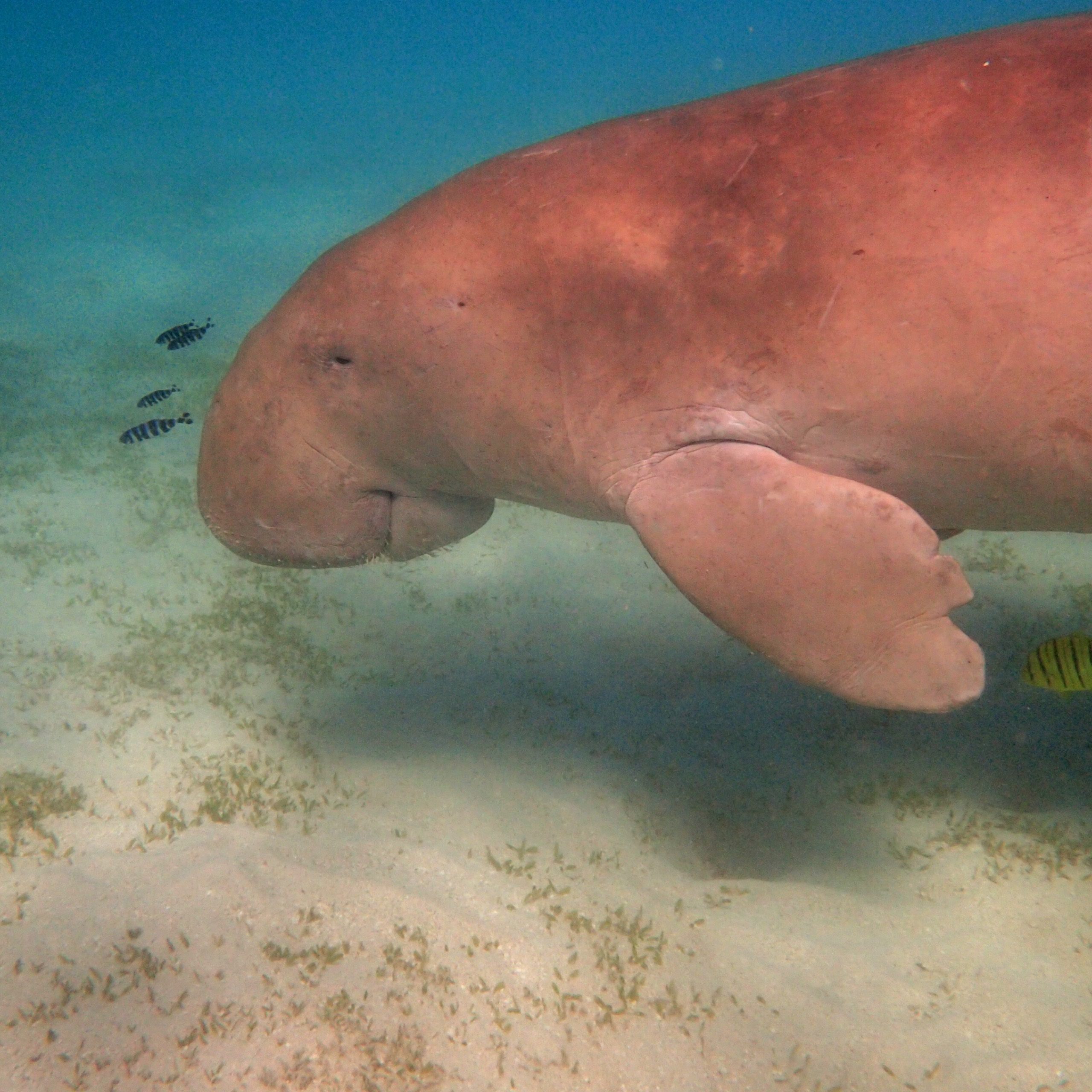 As a mother, few creatures come close to her dedication and care for her young. Baby Dugong are born pale brown, one meter long and weigh around 35kg. They immediately start swimming, although the mother must help to push the young calf to the surface to get its first breath. From that moment on the two are inseperable, the calf suckling her mothers milk for 18 months and learning how to find the juiciest seagrass. They communicate constantly with little bird like chirps, squeaks and trills and the calf swims very close to mum often reaching out a flipper for that reassuring touch.

Dugong conservation is a very difficult and complex task. Throughout the Indo Pacific region Dugong numbers have been decimated through over hunting and coastal development. Northern Australia remains as the last stronghold for the species with Shark Bay alone containing 10% of the remaining population. Dugong populations are unable to rebound quickly as they have a very low reproductive rate, even if every female bred at full potential the maximum rate the population could increase is only 5% per year. Their life cycle is very similar to humans, living to 70 years old except they must survive the dangers of the sea and don’t have access to Medicare. To add to the complexity, Dugongs move, sometimes a very long way. A tagged female crossed the gulf of Carpentaria (600 km) in only 5 days, other males have been tracked swimming from Beagle Bay to Port Hedland and back again. Perhaps the greatest nomad is a tough, lone male who swims from Shark Bay to Cocos island for a holiday. He survives a long ocean swim without feeding, as it is 4 km deep, and is quite happy being surrounded by packs of sharks. He must have some serious attitude for a fat, slow, vegetarian to keep those sharks at bay.

Glimmers of hope for Dugong can be seen in marine parks around Northern Australia. The Great Barrier Reef marine park has dedicated Dugong sanctuary zones in areas with abundant seagrass in shallow water. Traditional owners In Queensland have agreed to not hunt Dugong in these zones to give them some chance of recovery. Shark Bay marine park also has special zones put in place to protect seagrass meadows and Dugong populations. If enough of these zones are dotted along the coastline, Dugong have sanctuaries to live in despite their long distance movements.

The Kimberley Dugongs face ever increasing pressure and are at the cross roads of effective conservation. If the new Great Kimberley marine park contains zones that protect important calving areas or rich seagrass meadows, Kimberley Dugongs may stand a chance at recovery. Of course support from Kimberley traditional owners will be essential to ensure the success of the most beautiful, fat ladies of the sea.