Broome has had the wettest year on record already, with four significant low-pressure systems providing 1,567 mm of rain at time of writing. Broome’s annual average is 615 mm.

How has the wildlife been coping with this wettest of wets? 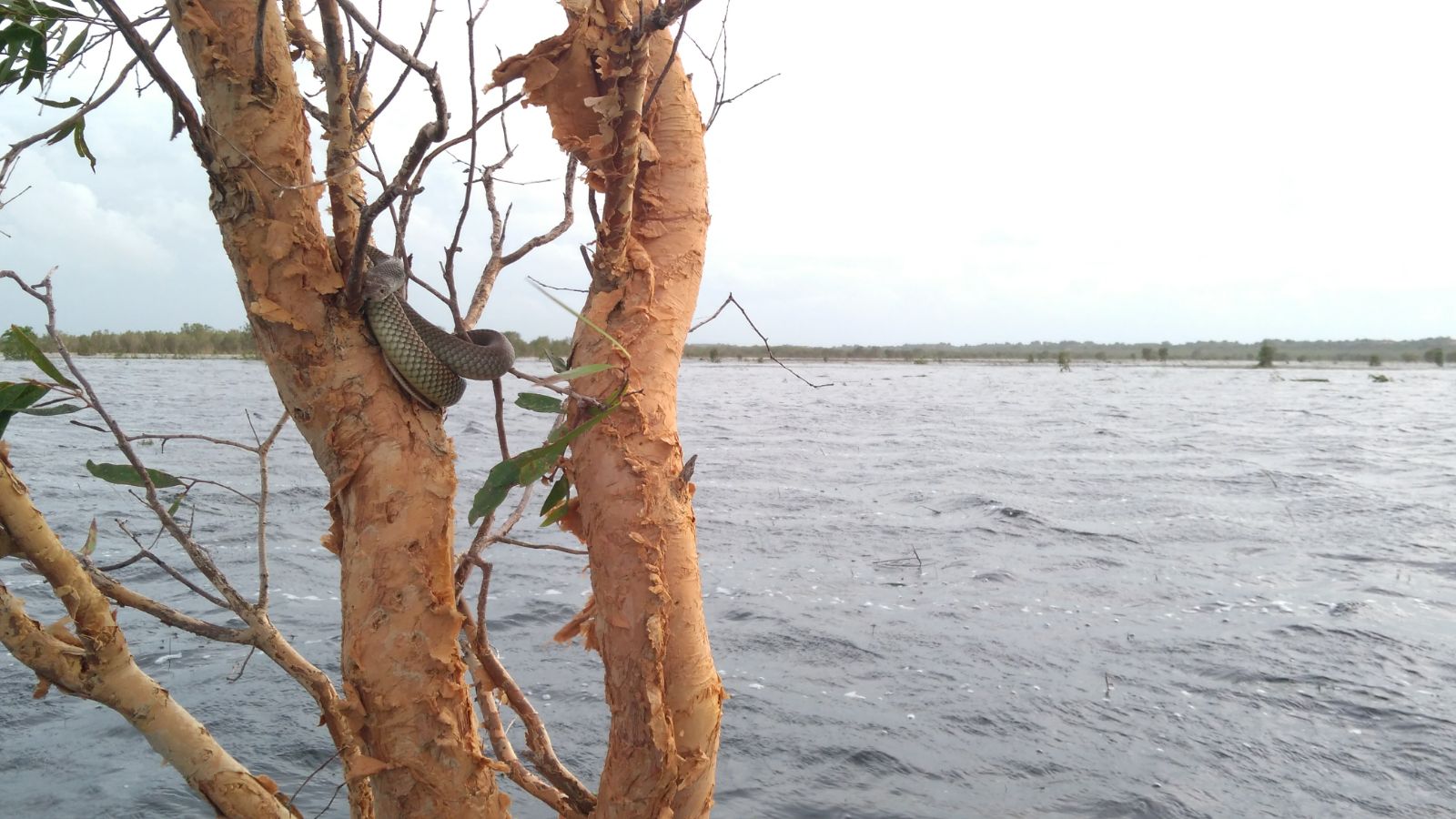 Some of us were lucky enough to find out after the most recent storm, which eventually became Cyclone Kelvin. I had heard of floods pushing snakes and lizards into trees. What we saw as we paddled on flooded Buckley’s Plains was one of those once-in-a-lifetime nature experiences that feeds the inner child with wonder, a wonder at the core of most biologists.

As soon as Kelvin let us, Tess and I paddled our kayak north along the end of Lullfitz Drive, down firebreaks, through the saltwater paperbark woodland and onto the plain: normally an expanse of grass, saltmarsh and termite mounds. In the middle of the plain, the few islands remaining above the 1.5 m water — paperbark shrubs, termite-mound tips and grass clumps — were overflowing with animals sheltering and recovering. One two-metre paperbark held over 500 frogs, 10 skinks, four blue-tongue lizards, three goannas and two snakes. From tree to shrub we paddled, observing over 20 species, everything from Mulga (Pseudechis australis) to Whip Snakes (Demansia angustica), Yellow-spotted (Varanus panoptes) to Spiny-tailed Monitors (V. acanthurus), Plain (Ctenotus inornatus) to Eastern Striped Skinks (C. robustus), and Great (Cyclorana australis) to Striped Rocket Frogs (Litoria nasuta). 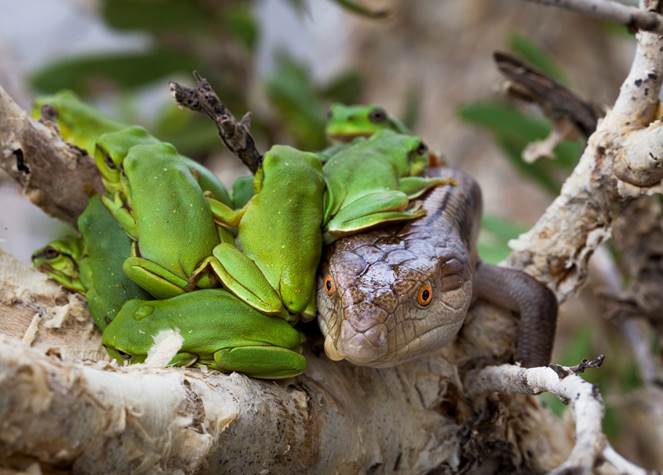 The animals had been pushed into the trees by the floodwaters. Many more were in the few trees in the middle of the plain than in the wooded fringes. The behaviour of the animals was remarkable. They were exhausted. All the animals we saw normally shelter in burrows, termite mounds and leaf litter, and many hibernate during the dry season when temperatures drop and food is less available. Yet here these cold-blooded reptiles and amphibians had to endure two days of over 70 km/hr winds, 401 mm of rain, cloud cover and the coldest February day on record (maximum temperature of 25.3 °C), clinging to the paperbark branches.

They were so exhausted that predator-prey behaviours were on hold: frogs were sitting on top of predatory snakes, small skinks sitting next to the same, balls of frogs and lizards huddling, most likely for warmth. The animals could not flee from us humans; we could have plucked goannas and snakes out of the trees. 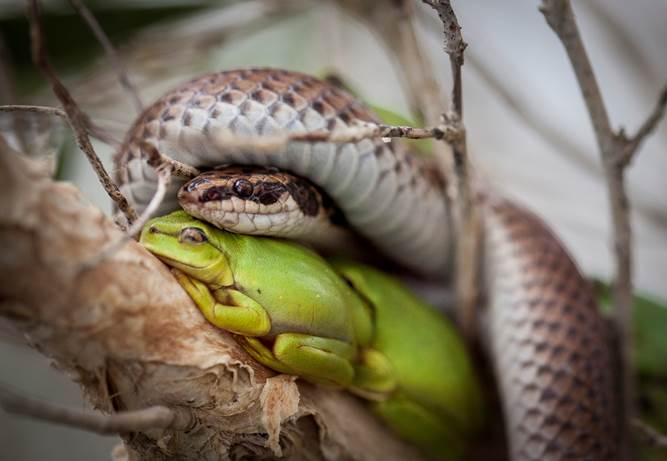 Over the next three days we revisited the flooded plains, and Noah’s paperbarks, by ourselves, with photographer Damian Kelly, and with the Yawuru Country Managers. As the wind dropped, rain stopped, clouds parted, weather warmed and water receded, the animals started dissipating, showing more energy and regular behaviours. They started jumping out of trees and swimming away as we approached, hunting, sheltering and exploring.

If we scientists were to try to measure the reptile and amphibian biodiversity of that area in the dry season we would be in the field for weeks and never come close to the abundance and diversity we observed in a two-hour paddle. It’s not every day you get to see how animals respond to cyclonic conditions.

It was an awe-inspiring experience of nature. Such experiences are a large part of why we live here in the KImberley, and why we fight to protect its biodiversity and traditional culture.