The world recently came together to address the climate crisis at COP 27 in Egypt. The science is clear; we have some serious challenges ahead of us to mitigate the impacts of climate change and, if we want a liveable climate for ourselves and future generations, we cannot open any new oil and gas basins.

Climate scientists have warned us that, if the Kimberley’s Canning Basin is fully fracked, it will emit more than twice as much carbon as Australia’s entire carbon budget for energy under the Paris Agreement. On future emissions projections, parts of the Kimberley will be too hot to live in by the end of the century.

Despite all these warnings, the WA Government is allowing companies to frack this region. Yet, this same government is promoting the beauty of the Kimberley in ads being broadcast across the country right now.

Our powerful opposition has driven Origin Energy away. It shows that when the community stands together and sends a strong message, companies take heed. 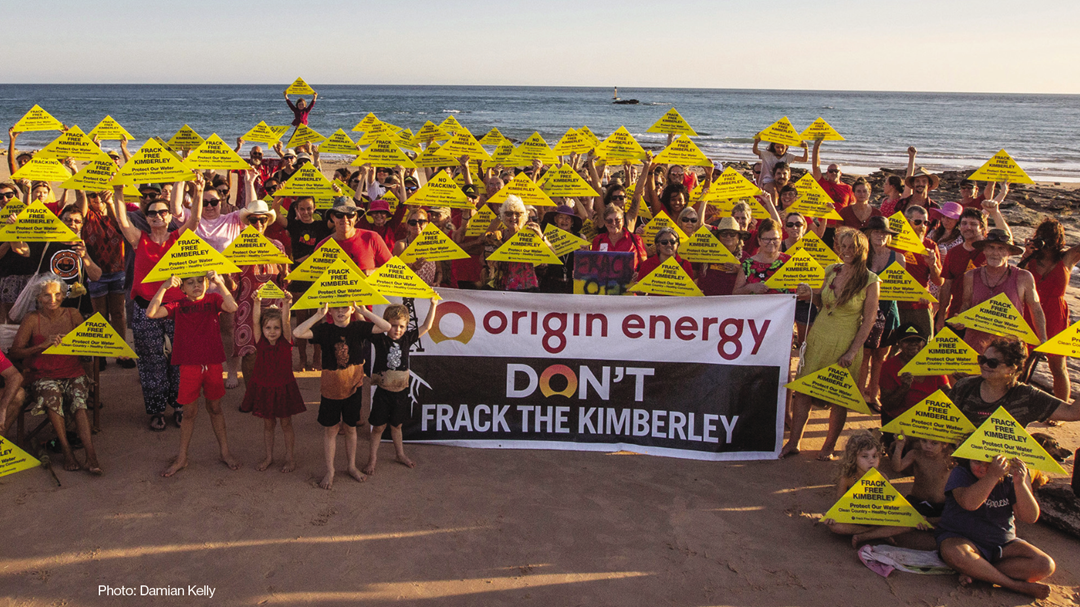 We’re facing a huge threat as several companies remain committed to building a pipeline for the region.

Theia Energy withdrew its application to frack next year, submitted a drilling plan, then withdrew that as well. When we called them on it, they said they will be back.

Meanwhile, Buru Energy continues to investigate a pipeline from its gas find near the Martuwarra Fitzroy River. It’s also considering a floating gas factory on the Kimberley coast.

Black Mountain, a Texan company, has applied to the EPA to frack 20 wells. It already has an in-principle agreement with the Minister for State Development Roger Cook to export gas via a pipeline to the Pilbara.

The 20 proposed wells would be the first of thousands of oil and gas fracking wells through the catchment, threatening to pollute ground and surface water with toxic chemicals and radioactive wastewater.

We need your support for a Frack Free Kimberley

We are the Kimberley’s last line of defence. Traditional Owners, the Kimberley community and supporters from around the globe are standing together to protect our region from fracking. Our numbers are growing.

As a supporter, you were part of the community campaign that gave Origin cold feet.

With your support, we can hold the line for a Frack Free Kimberley – forever!

Your support helps us keep abreast of the latest industry plans through in-depth research. It allows us to engage decision-makers, government and companies to keep the Kimberley frack free. It enables us to spread the word around Australia and beyond of the threats of fracking to our region.