The Cable Beach ghost gum (Corymbia paractia) is endemic to the Broome area. Yawuru people know these trees as gunurru.

Their flowering in larja season indicates the hunting time for stingray (birndany) and sliteye shark (jurrawayi). Cicadas or liyirr, once an important food, emerge from gunurru during this time (‘Yawuru Cultural Management Plan’, 2011). Gunurru were important meeting places, providing some of the best ash and a bark that was used to make coolamons.

The Cable Beach ghost gum vegetation community is listed as a Priority One Ecological Community (PEC) under the State of Western Australia and assessed as Vulnerable under IUCN criterion. In 2014, less than 260 hectares of the Ghost Gum community was thought to remain.

Urban development and expansion continue to be the ghost gum’s greatest threat. Since Broome was established in 1883, it is estimated that more than 1500 hectares of ghost gum vegetation has been cleared, and this has continued during the collation of our surveys and reports for this project! A further 180 hectares is expected to be cleared in the Broome Road Industrial Area development.

40% of the ghost gum community is protected within reserves, with the rest exposed to clearing and development. Weeds, wildfire and rubbish dumping threaten the quality of all remaining patches. 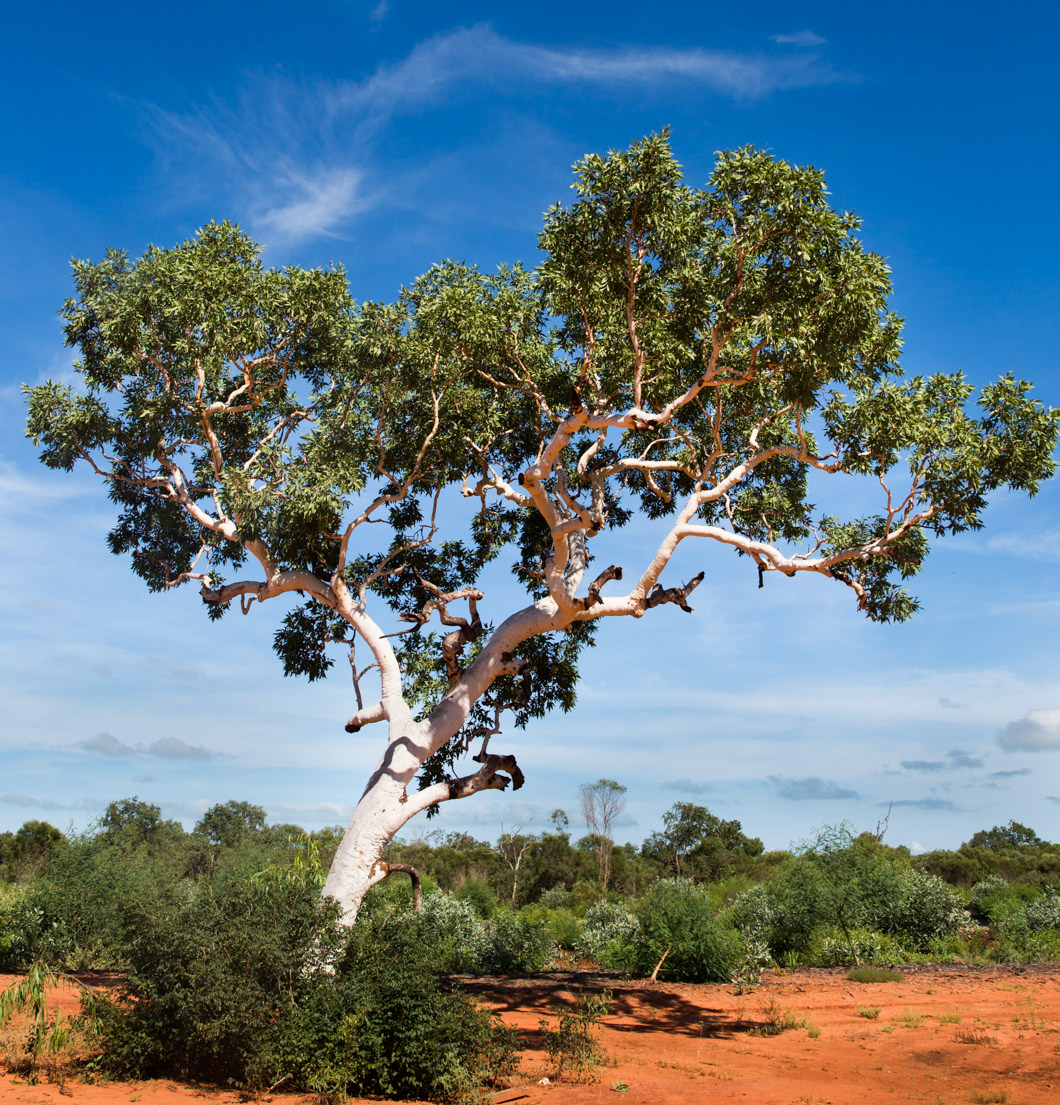 The extent, location and ecology of the rapidly disappearing Cable Beach ghost gum has been poorly understood until now.

To help protect the community, the Kimberley Nature project (KNP), in partnership with the Broome Botanical Society (BBS), the Society for Kimberley Indigenous Plants and Animals (SKIPA) and the Nyamba Buru Yawuru (NBY) Country Managers, has mapped the extent of the community, prepared an educational publication, collected seed and grown and distributed saplings.

In 2013 and 2014, Tim Willing of the BBS conducted extensive on-ground surveys, locating much of the vegetation community and almost every single Cable Beach ghost gum tree within the township. Louise Beames of EK assembled the GPS points and collated the maps. The two of them produced a comprehensive mapping and condition assessment report of the community.

This work substantially increased our understanding of where the ghost gum occurs, the broader vegetation community and associated fauna, as well as the health and condition of the community patches. We lodged all data points and maps with the Department of Parks and Wildlife (DPaW) database and in 2015 presented our findings in the paper 'A Peninsula of Competing Priorities – Threatened and Priority One Ecosystems (TECs and PECs) on the Broome Peninsula' at the State NRM Conference.

We produced a mapping and condition assessment report in 2015 with recommendations for stakeholders to inform improved development and conservation planning.

In 2016–17, with the support of Eucalypt Australia, we again partnered with Tim Willing and the NBY Country Managers to map and document remaining C. paractia populations and to record traditional ecological knowledge.

We have produced a community publication and distributed  it for use by the Yawuru community, Broome residents, planners and land managers.

A scientific report has been produced in 2018 that details our findings from surveys in 2016-17 and 2015 and identifies threatening processes including neem weeds and land clearing, and makes recommendations.

We are now facilitating the distribution of the community publication and scientific report to raise awareness and build momentum for greater protection of the Cable Beach ghost gum community.

SKIPA volunteers are continuing to collect and grow Cable Beach ghost gum seed, and to distribute seedlings to promote horticultural use of the tree among local communities.

We are seeking more funding to work with Yawuru Traditional Owners to develop and implement management plans for the Cable Beach ghost gum community, and develop a nomination for this vegetation community to be upgraded to Vulnerable under the WA Biodiversity Conservation Act (2016).

We will continue to advocate for improved planning decisions that protect the Cable Beach ghost gum community.

'Native trees unique to Broome could be lost', ABC Kimberley