Five years since we won the battle for James Price Point

In one of the most remarkable defences of the environment in Australia’s history, a small community on the edge of the desert in the north-west of this great continent, inspired a movement to protect the Kimberley coast from industrialisation. 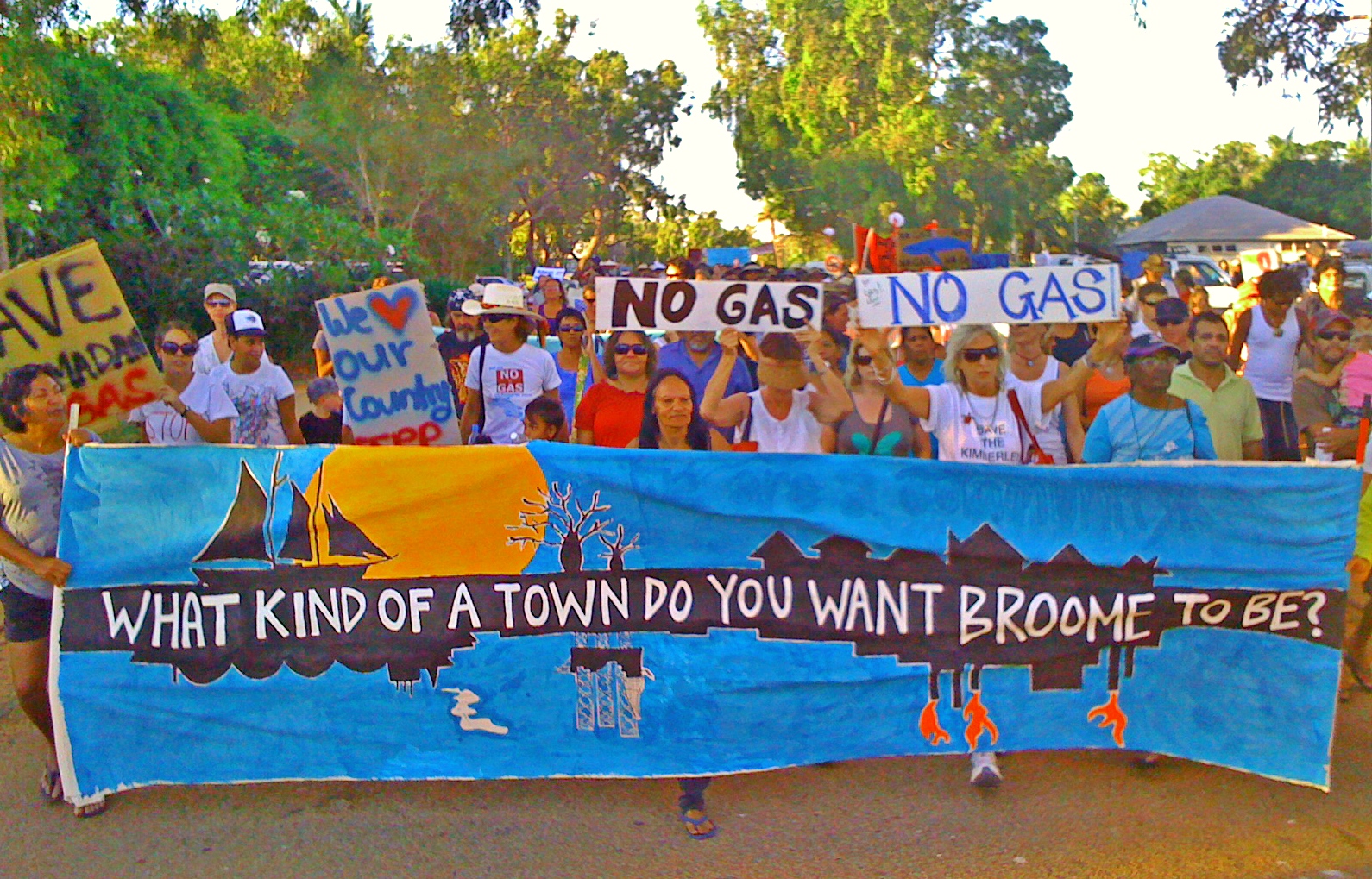 The proposal was the West Australian’s Premier Colin Barnett’s keystone project to underpin the state’s development through the industrialisation of the Kimberley. The Pilbara had underwritten WA’s development for the previous 50 years; in Barnett’s eyes, the Kimberley was next. The project was supported by the Australian Government. Certain sections of the media also backed the project.

Resistance was futile, the forces for development were too powerful, it must be accepted and the impacts managed, it was going to happen regardless, there was no choice, capitalise on the plan or perish was the catchcry…then came the resistance.

It’s worth reflecting on the horrors this proposal would have inflicted on the Kimberley coast, Broome and the whole region.

According to the government and the Browse Joint Venture’s own reports, 30km² of gas refineries would have covered a corridor of great botanical richness: ancient remnant rainforest containing bushfoods and fruits and rare and endangered plants and animals. Despite this same area having been proposed for a National Park in 1962, and having tremendous, well-documented cultural significance, the WA Premier Colin Barnett deemed it suitable for industrialisation.

A port would have been cut into the sensitive dune system and 50km² of surrounding ocean, brimming with sealife – fish, turtle, Dugong, Humpback Whales, corals, seagrasses – would, on the developers’ own admission, have become a marine deadzone. Oil from any spill would have reached Cable Beach in 10 days, according to modelling reports, and 30 billion litres of wastewater was to be pumped into the ocean, every year. The refineries would have been the largest single source of poisonous benzene on the continent. 50 million tonnes of climate-change-inducing carbon dioxide would have been belched into the atmosphere every year. According to Premier Barnett, it was just a ‘pinprick’ equivalent to ‘one seat in the MCG stadium’ on an ‘unremarkable beach’. He sent in the police regional response group.

A government report from 2005, a blueprint for the industrial development of the whole Kimberley, put the case forward for gas refineries on the Dampier Peninsula. LNG could be exported to Asia.  It would also power an alumina refinery near Broome to process bauxite mined and shipped from the Mitchell Plateau, deep in the North Kimberley. A lead and zinc refinery would be built and the produce exported through Broome.  Coal, uranium and other minerals would be mined and the Kimberley would become the next Pilbara.

Social impact assessments showed that the health and justice sectors were already at breaking point in Broome, yet the government admitted it couldn’t prevent the expected 8,000 fly-in, fly-out (FIFO) workers from staying on in town at the end of their shifts. It also refused to commit to improving and expanding health and justice services in Broome. It seemed that all they wanted was the revenue. 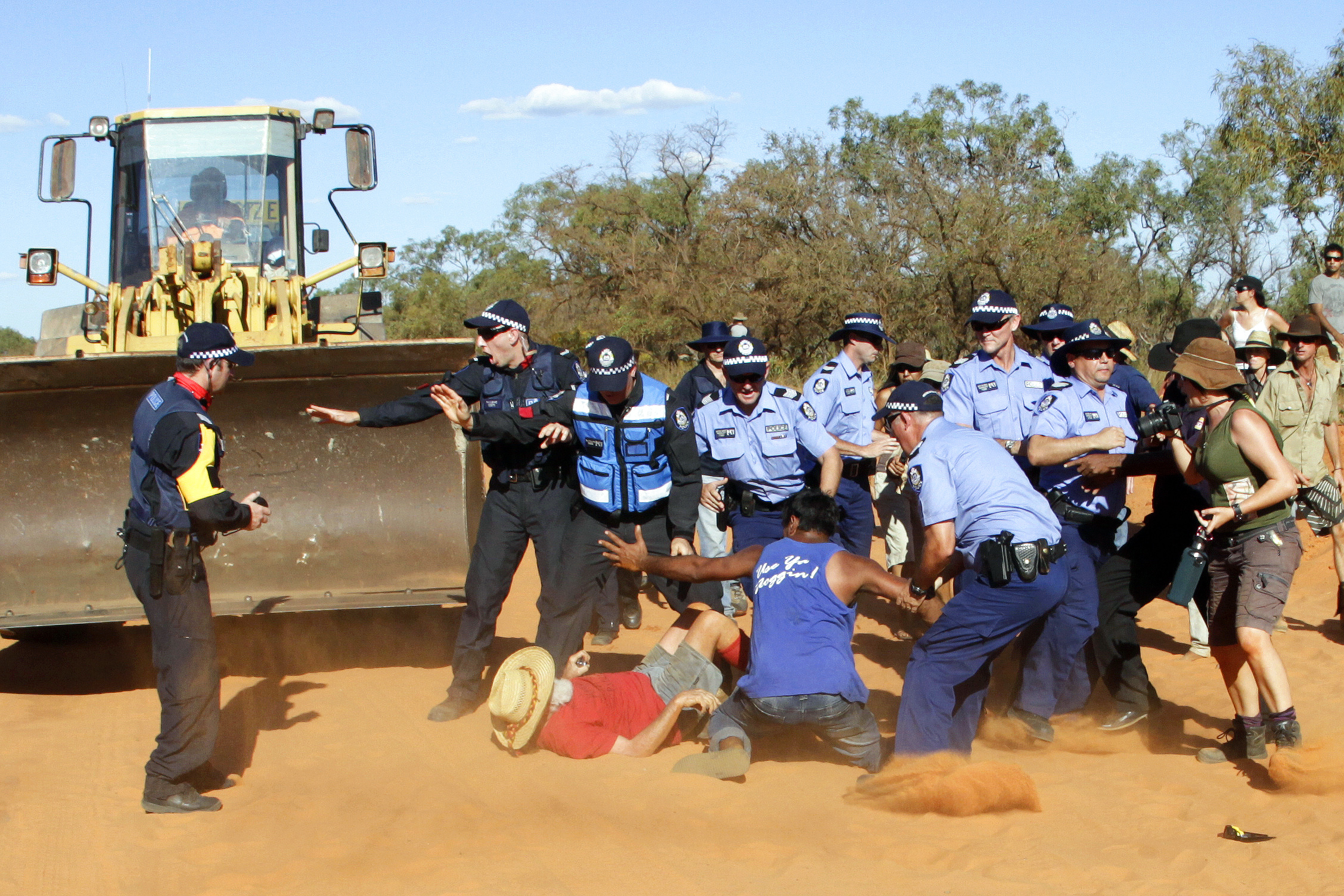 It was clear Broome would have been transformed into a mining town. FIFO miners working in the Pilbara opposed the refineries because they didn’t want Broome to become like Port Hedland or Karratha. A Karratha and District Chamber of Commerce Board member flew into town to warn businesses not to follow the same disastrous path of the Pilbara.

Then the Broome community, old and new, mobilised to defend the town and the Kimberley from industrialisation, support piled in from around the globe. Australian environment groups backed up the community. Support steadily grew to a crescendo in February 2013, when 20,000 people rallied at a concert in Fremantle, with John Butler, Missy Higgins, Bob Brown and Scott Ludlam who all have long term connections to the Kimberley, speaking and signing out. Just a month before the March state election, this was a loud message that government and industry could not ignore. The WA Greens won the popular vote resoundingly in Broome, as the only party to oppose the refineries outright. A month later, Woodside and its partners were gone. 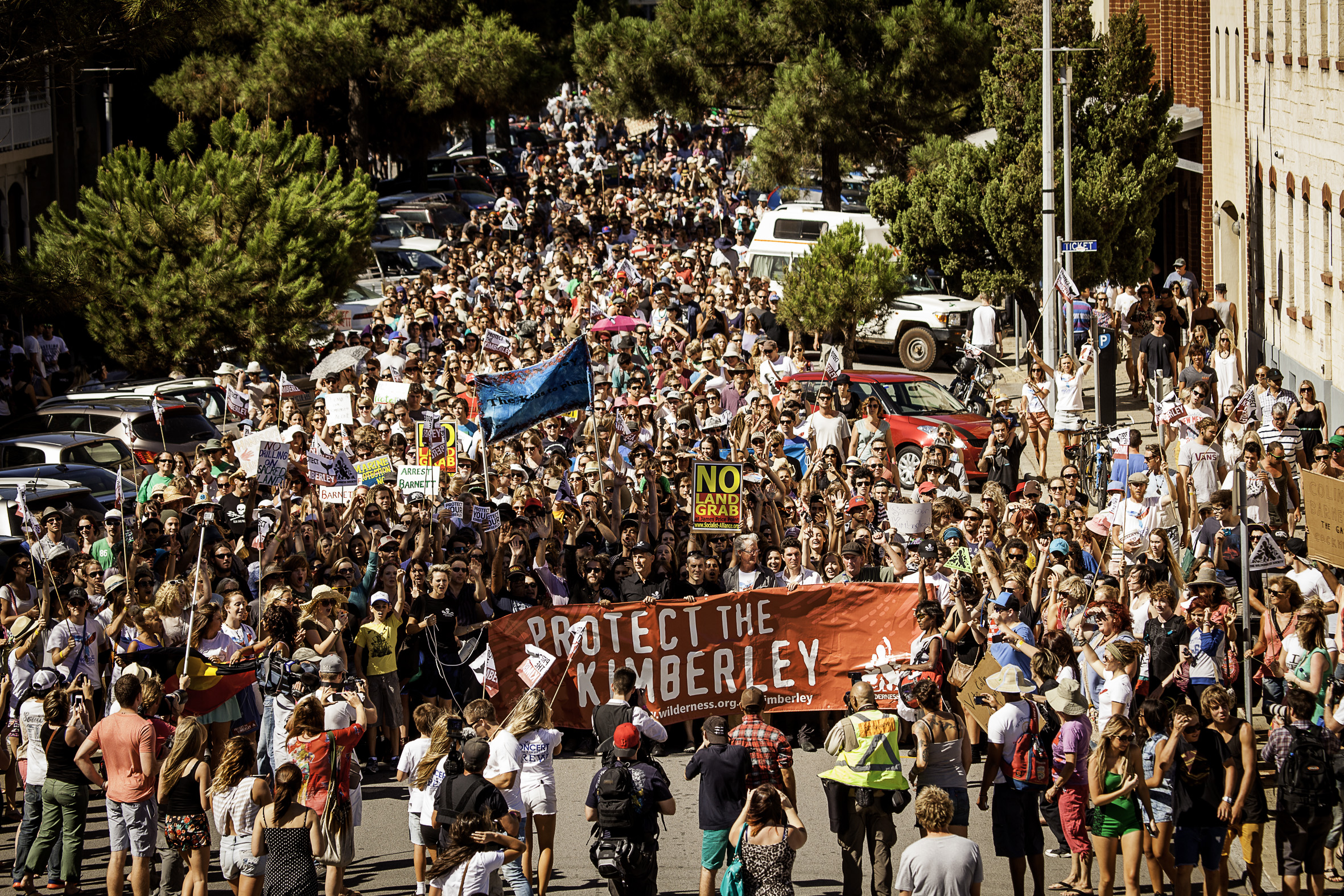 20,000 people march in Fremantle in support of protecting the Kimberley from industrialisation (Photo: Adam Monk)

Despite the heavy toll on activists, quiet celebrations took place – a small community had won against the biggest fossil-fuel companies in the world, as well as the state and federal governments. This was a victory we remain proud of and, five years later, Broome and the Kimberley have not been industrialised and have slowly healed from the trauma of forced economic development from outside.

The community is now banding together again to develop a vision of a new economy for our region, an economy that respects the globally important cultural, social and environmental qualities of the Kimberley.

For a more in-depth understanding of the campaign to protect the Kimberley, you can purchase James Price Point — the story of a movement By Damian Kelly through our website here.

Environs Kimberley is a not-for-profit charitable organisation dedicated to protecting the Kimberley – to support our work become a member here or make a tax-deductible donation here.