THE KIMBERLEY – ONE OF THE WORLD’S LAST NATURAL REGIONS

The Kimberley region is of global importance. The ecological and scientific values of one of the least spoiled and most extensive naturally functioning suite of ecosystems left on the planet are comparable only with areas such as the Amazon and the Antarctic. Its seas, myriad islands, coral reefs, mangroves, rainforests, savanna woodlands and rivers are home to an astonishing variety of marine and terrestrial wildlife.

The Indigenous cultural values of the Kimberley are outstanding; the Traditional Owners’ ancient connections to their country are unbroken to the present day. The region has a $500 million tourism industry based on its natural and cultural values.

Despite its National Heritage-listed values, wetlands of international significance and nationally listed threatened species, the Kimberley is under threat from oil and gas companies wanting to open up the region to fracking.

If fracking got a foothold, the landscape would be changed forever, and this highly polluting industry would be a blight across the region, threatening its clean air, water, and reputation as a world-class tourism destination.

Texan-based fracking company Black Mountain Energy is aggressively pushing to establish gasfields across the region. It has applied to the Environmental Protection Authority to drill and frack 20 oil and gas wells in the heart of the Kimberley, 60km from Fitzroy Crossing.

Black Mountain has also been given a conditional green light by the McGowan Government to send gas overseas or interstate. Despite knowing that the climate crisis is escalating and the world needs to cut carbon emissions drastically, Premier McGowan is allowing plans to open up a new global-scale fracking gasfield to roll on.

Meanwhile, the International Energy Agency has said that no new fossil fuel basins can be opened up if we are to have a safe climate.

The McGowan Government’s approval and support for Woodside’s Scarborough project will lead to massive carbon emissions, but these will pale in comparison to the emissions that would come from the Canning Basin (see comparison in ‘Gas reserves North West Western Australia’ below’). 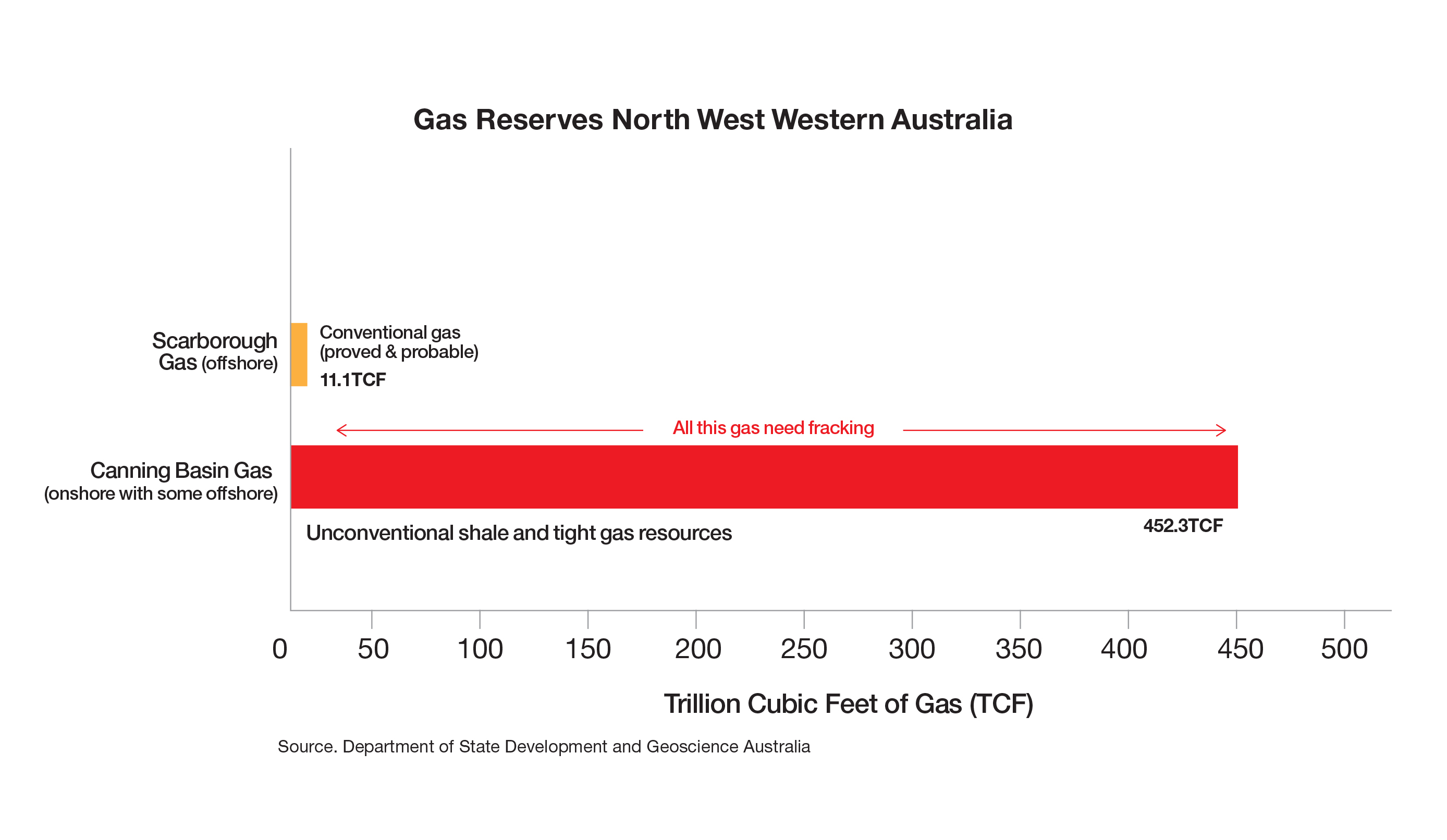 A report by Climate Analytics estimates the emissions from fracking the Canning Basin to be more than double the whole of Australia’s allowable CO2e emissions under the Paris Agreement[1]. 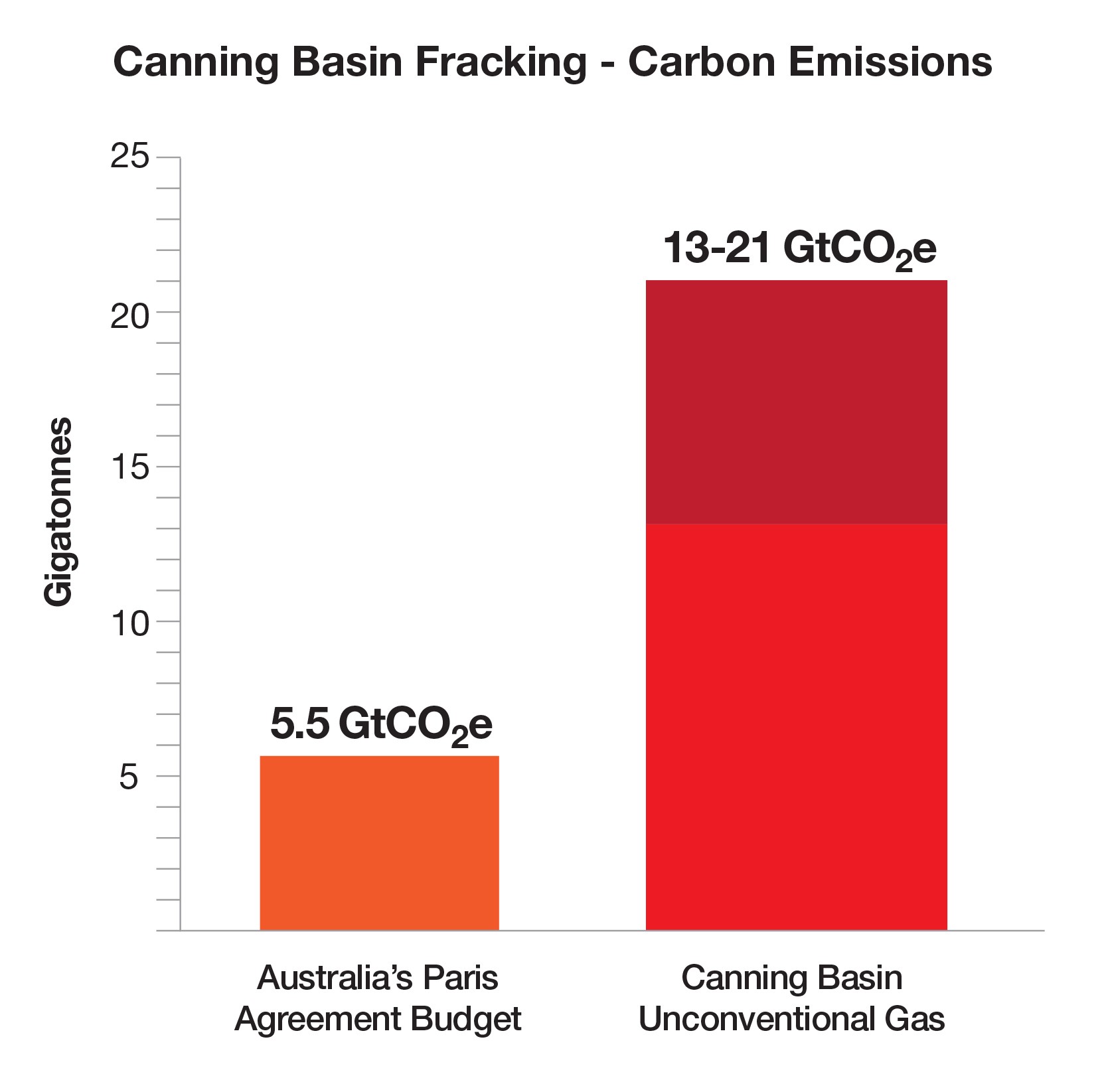 The State Development Minister (previously Minister for Health) Roger Cook, told Parliament in June that the Federal National Party wanted to drag Australia back to the “dark ages of coal, climate change denial and taking WA’s economic future backwards”, and that the state government had a “green energy vision for WA.”. A few months later he granted Black Mountain Energy a conditional exemption from the domestic gas policy, which was developed to reserve gas for Western Australia’s future use. 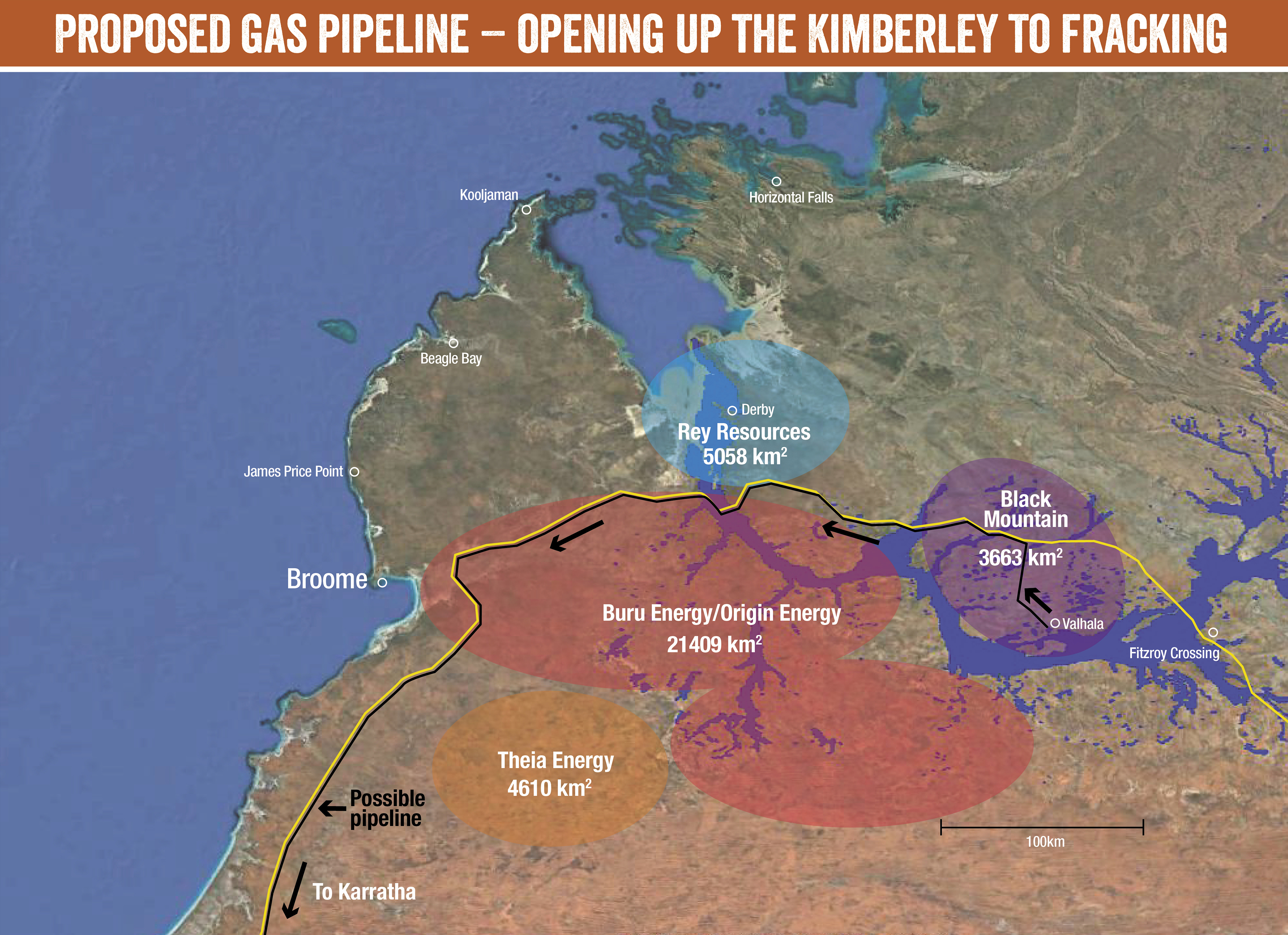 Black Mountain would need to build a 1,100km pipeline from the Kimberley to the Pilbara at an approximate cost of $1.2 to $1.5 billion. Other petroleum companies with interest in the Kimberley (Origin Energy, Buru Energy, Rey Resources, Goshawk Oil and Gas and Theia Energy) would all be likely to follow suit, seek an export exemption and join the pipeline network[2].

Thousands of wells would have to be drilled and fracked to pay for a pipeline of this cost and scale. The Kimberley’s world renowned landscape would be turned into an industrial gasfield, like the ones that blight North America. 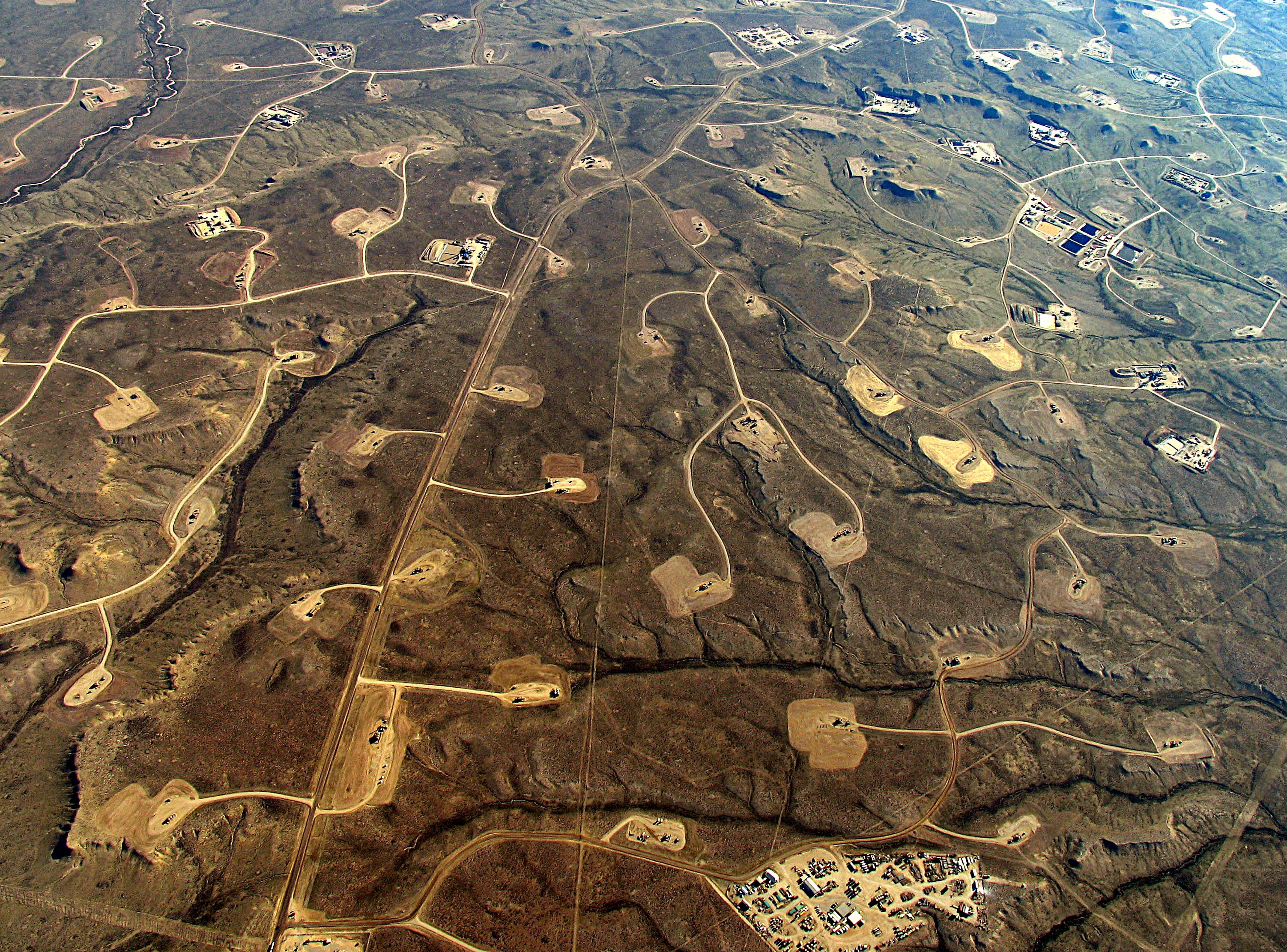 Is this what Australians want the Kimberley to look like?

The vast majority of Broome and Kimberley people, including Traditional Owners, are opposed to this toxic industry getting a foothold in the region. Premier Mark McGowan and State Development Minister Roger Cook need to hear from thousands of West Australians and people across the continent that the Kimberley must be protected from industrialisation, and that opening up a new fossil fuel basin for fracking will risk a climate-change catastrophe. 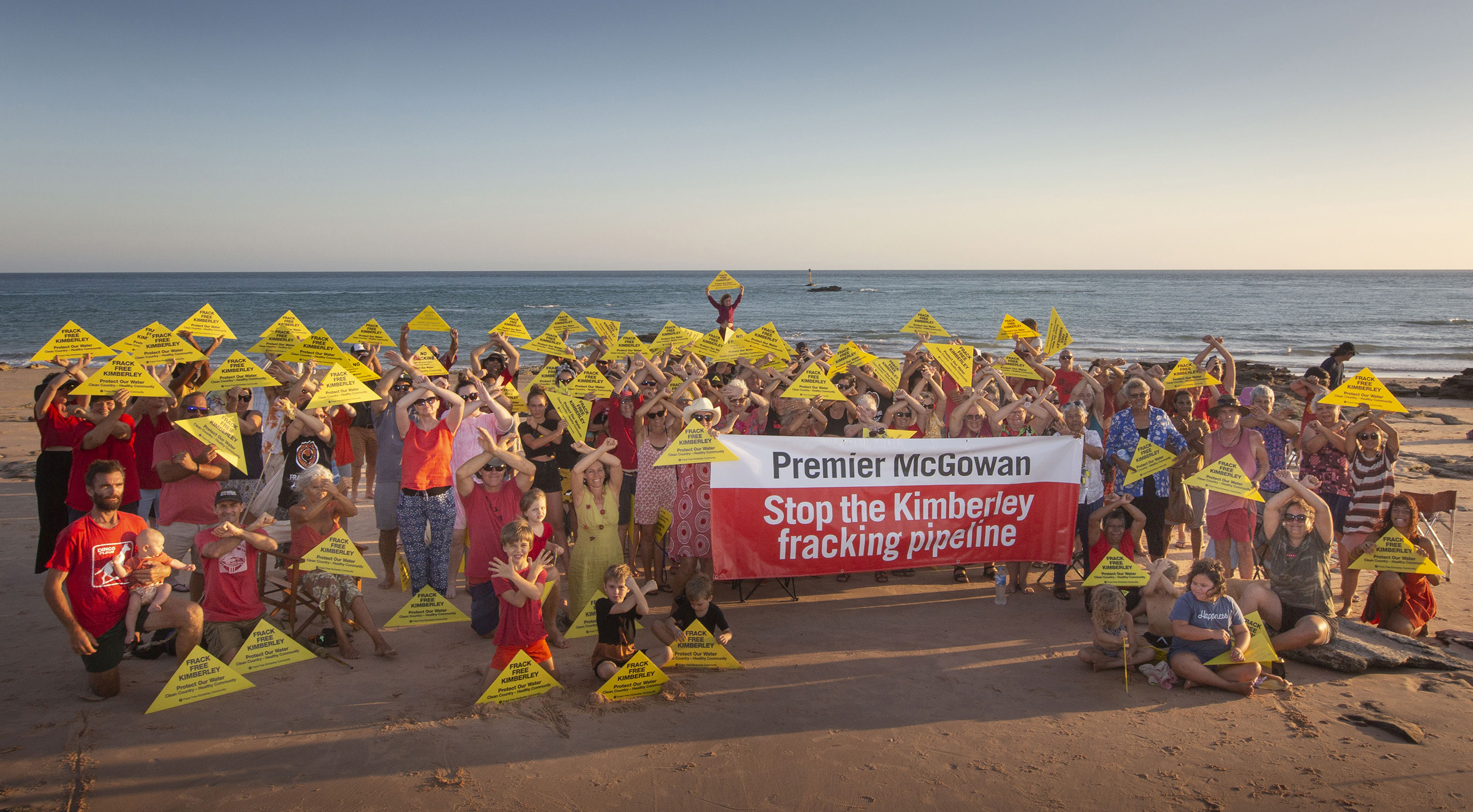 Send a strong message calling on your local Member of Parliament and relevant Ministers to stop fracking the Kimberley by going to this link.

If you’d like to donate to the campaign to save the Kimberley from fracking, you can make a tax-deductible donation here