On November 27th the Premier, Mark McGowan, announced that the moratorium on fracking  in the Kimberley is being lifted. This will go down in history as the most retrograde decision in decades, made despite the objections of a large majority of the community, including Traditional Owners, WA Unions the State Executive of the Labor Party, and government MP’s.

The Premier, with Bill Johnston, Minister for Mines, and Stephen Dawson Minister for the Environment, rammed through the decision. They said they had listened to the so-called ‘science’, completely ignoring the wishes of the electorate and the appalling record of the fracking industry in the Kimberley so far. Radioactive wastewater near Noonkanbah, two gas leaks at Yulleroo, wastewater ponds overflowing, dead animals in turkey nest dams, no inspections for seven years of the first well to be fracked, threats against a public officer by a Buru Energy employee — all of this was ignored.

The government spin-doctors tried to paint the decision as ‘balanced’, saying that ‘only’ 2% of the state would be open to fracking.  This is nearly the size of Tasmania, and all existing exploration and production leases remain active.

Veto rights for traditional owners and owners of freehold land were a way for the McGowan government to avoid taking responsibility for the decision – leaving it to others who are vastly unequal in power to the fracking industry. It is not yet widely understood that these veto rights apply only to wells for production. Before production takes place, wells have to be tested, and test-fracking is not covered by veto rights. This means that many wells could be test-fracked without consent from Traditional Owners or freehold landowners.

The inquiry failed to undertake a lifecycle analysis of greenhouse gas emissions, even though this was an election commitment of the Labor Party. No economic analysis was done to find out if and how fracking might benefit the state, and how many jobs it might bring. An analysis by independent economists, The Australia Institute, shows that fracking would bring very few jobs to WA. Most of them would be in Perth and on available figures would provide between 3 and 19 long-term jobs for Aboriginal people. Royalties to the state would be equivalent to the revenue from speeding fines. The Australia Institute planned to present its findings to the Labor MPs in parliament, but the presentation was cancelled by the Premier just as the team landed in Perth.

To justify fracking, the Premier said that WA will run out of domestic gas supplies early in the next decade. If this is the case, it reveals an appalling mismanagement of an industry that is exporting billions of dollars’ worth of gas.

Fracking is now banned in the South West, Perth and Peel, and the Premier announced that the Dampier Peninsula would also be spared. No explanation of the ‘science’ of this decision was made. The Premier has failed to convince a majority of Kimberley residents that fracking is safe.

The Premier and his government have made one of the worst decisions for the environment of the Kimberley. The can redeem themselves only by reversing the decision — and that’s what we will push them to do. 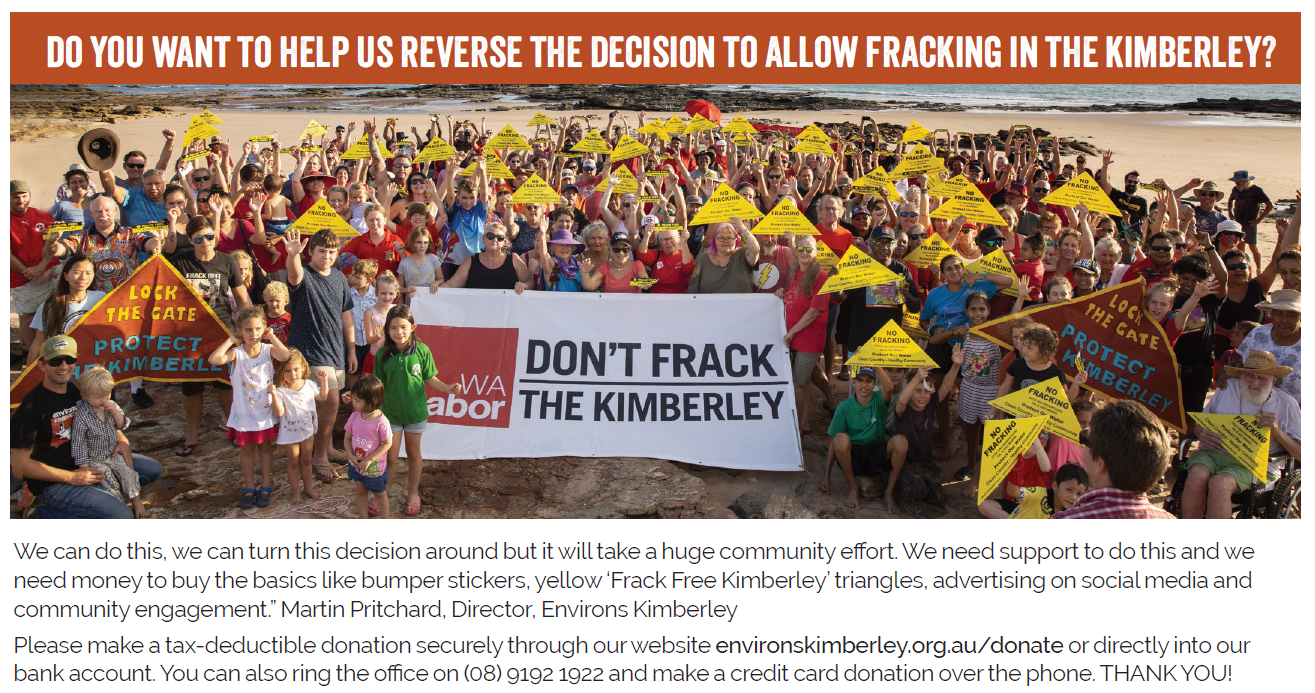