Protecting the Kimberley for 25 years – thanks for your support!

People have actively protected the Kimberley over millennia and maintained a rich landscape with species found nowhere else on earth. We pay tribute to them. Over the past few decades, the local community got together to ensure this magnificent region, particularly the west Kimberley, wasn’t turned into an industrial and urban conglomeration like nearly everywhere else in the world. As more destructive developments came, the community pushed back. In 1996, a band of three got together around a kitchen table in Broome to take action to protect the Fitzroy River from dams and cotton farms by supporting traditional owners to defend their Country. Environs Kimberley (EK) was born. 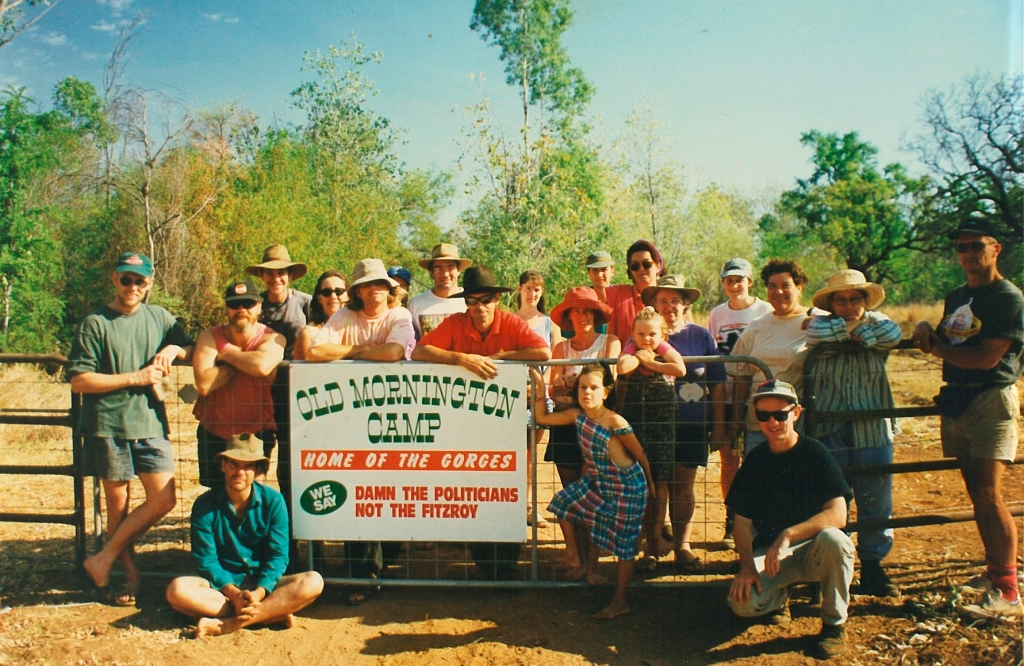 From humble beginnings, EK has evolved into one of the country’s premier regional conservation organisations, with over 16,000 supporters and growing. We take the protection of the globally significant environment here extremely seriously. We won’t shy away from the biggest multi-national corporations, hostile governments and billionaires if their proposals threaten the integrity of the world’s most intact tropical savannah and the least spoiled coastline in the world.

Over the past 25 years we have stood strong for Country alongside traditional owner groups, the broader community and other environmental and Aboriginal organisations. We have successfully protected vast areas from industrialisation, letting the world know that the Kimberley is far too valuable to be destroyed for financial gain by people and shareholders who don’t live here and won’t have to witness the legacy of disappearing species, polluted water and savannah lost forever.

We have worked with Aboriginal ranger groups across the Kimberley since 2007. We are privileged to have done so together. By combining Traditional Ecological Knowledge or Aboriginal Science with Western Science, we have dramatically increased the documented knowledge of Kimberley ecosystems, plants and animals, and developed management plans to ensure their protection into the future.

Our success has come through collaboration and partnerships, and by building networks of knowledge and people not just across the Kimberley but nationally and globally. No one can defend this place alone. We are a small population in a region twice the size of Victoria. Working together is the only way to hold back the forces that would destroy vast areas of the Kimberley, if we let them.

We need to celebrate our successes and build on what we’ve achieved. The fight is not over, it’s just beginning. Here are some of the wins over the past 25 years, gained with the support of our members, donors, the EK Board, dedicated professional staff, partner organisations including Aboriginal rangers and grant providers, and the broader community.

In 1996, plans were set for three dams on the Fitzroy: at Dimond Gorge, the Margaret River Gorge and the Leopold River, to water over 200,000 hectares of genetically modified cotton. Traditional owners were horrified. The community mobilised, joining the small band of plucky volunteers who were EK at the time, to protect the river. Plans to destroy the river and savannah had brewed for more than a century. It took eight years of hard work and campaigning until the three-dam proposal was dropped. In 2005, ‘Colin’s Canal’ came back to haunt the river, but this idea, to take water from the Fitzroy to drought-prone Perth, evaporated almost as quickly as a wet season shower when the Opposition, led by Colin Barnett, lost the election that year.

When exploration for a kaolin mine was proposed on Thangoo pastoral lease, we stood with the pastoralists and traditional owners and objected. The proposal was withdrawn.

2005 was when Woodside and its joint venture partners Shell, BP, BHP and Chevron proposed building a gas refinery at Quondong, 30km north of Broome. The proposal morphed into a 30km² industrial site at James Price Point. When we asked the Premier Colin Barnett, who returned to power in 2008, if downstream industries, such as fertiliser, explosives and gas-to-liquid factories would be associated with the site, his response was that they could be, as long as they were distant from the gas refinery. This fitted in with the 2006 State Government plan to industrialise vast areas of the Kimberley. After years of opposition, most notably from the Broome community, Woodside pulled out in 2013.

In 2015, Rio’s Sam Walsh, who had been watching the gas refinery proposal, announced that the company would relinquish its bauxite leases on the Mitchell Plateau, stating, “When we develop a project we want to have community support, we want to have the community licence to operate.” Woodside’s disastrous foray and the push against it made it clear to everyone that in future companies would need a social licence — community support — to develop large projects in the Kimberley.

In 2010 the Fitzroy River catchment and beyond had tens of thousands of square kilometres of coal-mining tenements laid over it. Aspiring coal miner Rey Resources led the charge to open up the Canning Basin’s coal deposits for export, and we determined there was no way that was going to happen. Our objections and detailed submissions to the EPA, as well as traditional owners’ objections in the Mining Warden’s Court, put paid to this disastrous project, which would have polluted the Fitzroy River in wet season downpours.

When the Kimberley’s most popular tourist attraction by air, the Horizontal Falls, was threatened by a copper mine, we mobilised with tourism operators and other groups, leading to the protection of this special place, for now.

The Kimberley coast had no protection in 2008; now, most of this marine wonderland is in a marine park. We worked hard to make this happen, alongside other groups and in support of traditional owners. The job isn’t finished; oil and gas interests, mining and fish farming are still major threats but, in thirteen years, we’ve come a long way.

Monsoon Vine Thickets (MVTs), remnant rainforest from thousands of years ago, when the north of the continent was covered in this rich ecosystem, are now listed by the Commonwealth as a Threatened Ecological Community (TEC). Taking the lead from other Kimberley groups, we undertook the work necessary for listing. It is the only listed TEC in the region and our work with ranger groups continues to ensure MVTs’ long-term protection. 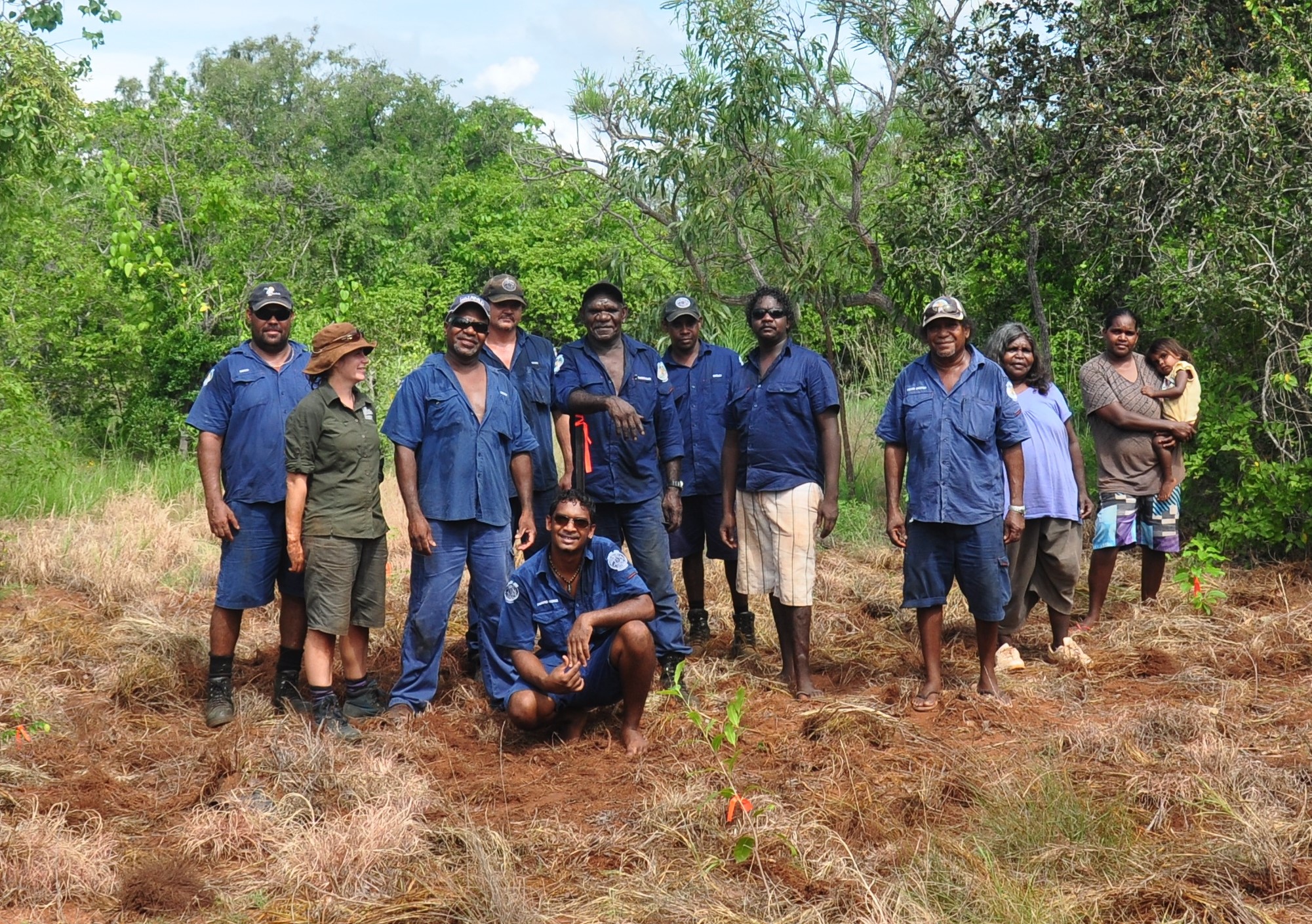 The Ramsar-listed Roebuck Bay is of critical importance to the people of Broome and surrounds and has been for millennia. Its mudflats are amongst the world’s most extensive and packed with invertebrates — food for migratory birds. The Bay is rich in pearlshell for the pearling industry, and a favoured fishing area. To monitor the health of the Bay, we have one of the longest-running citizen science programmes in WA, the Broome Community Seagrass Monitoring Project, in partnership with traditional owners and the state government. We pushed hard, successfully, to shut down the commercial fishery and develop a marine park in the Bay, and we’ll continue to lobby for a sanctuary zone.

Oil and gas companies have been wanting to turn the southern Kimberley into oil and gas fracking fields since 2010. Along with traditional owners and other groups we’ve kept this polluting industry out. The push is on again, with Texan frackers proposing to frack 20 wells. With your support, we won’t let that happen.

After successfully fending off the push for dams on the Fitzroy, we are dismayed to know that the river is once again under threat — from huge pumps, extensive landclearing and all that led to the Murray–Darling disaster. We are working with traditional owners to protect the river once and for all. Make sure you sign the submission to the government on our website.

As long as we have support and funding, we will continue to be a watchdog for the region. We’ll campaign strongly to protect the Kimberley’s precious environment and promote new sustainable industries to strengthen communities and help people to live and work on Country. Here’s to the next 25 years! 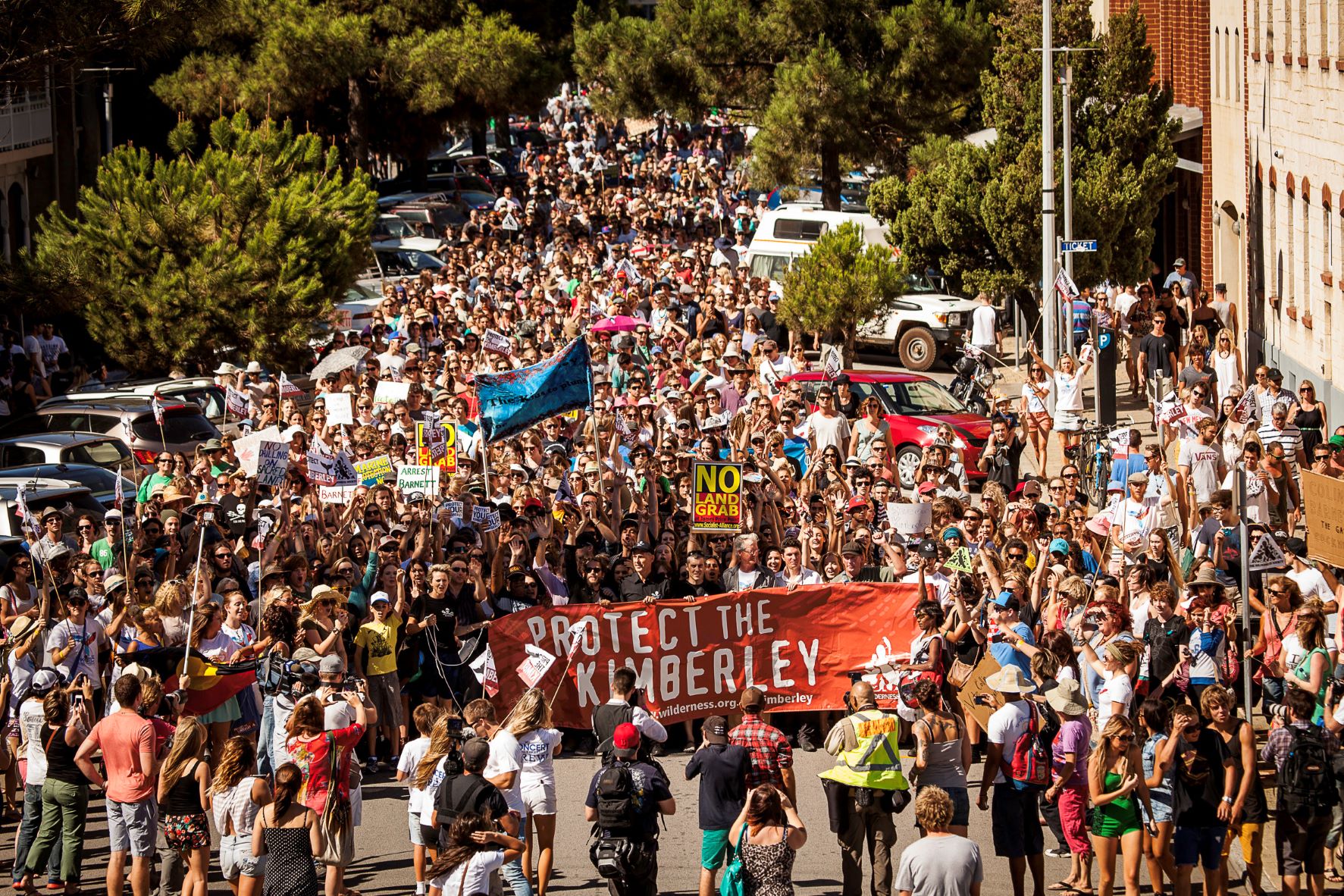